Readers share a range of strategies they use to get back to sleep in the middle of the night.

Most sleep experts offer standard advice to people who occasionally wake up at 3 a.m. and can’t fall back to sleep after 20 minutes or so: Ignore the clock, get out of bed and do a calming activity. Then, return to bed when you start to feel sleepy again.

As rates of insomnia skyrocketed this past year during the pandemic, many people struggled to overcome their sleepless nights. Our readers were no exception. We spoke to many of them to find out what techniques work for them when they find themselves awake in the middle of the night. Here’s what they had to say.

Count sheep … or whatever.

When Maria De Angelo, a teacher in Los Angeles who also renovates houses, has trouble getting back to sleep at 3 a.m., she closes her eyes and thinks of a complicated electrical wiring scheme in a kitchen she once renovated. The mental exercise induces boredom, much like counting sheep, which helps her drift back to sleep.

On other nights, to mix things up, Ms. De Angelo shuts her eyes and recites the names of every state in America in alphabetical order. “I haven’t yet made it past ‘N,’” she said. “Either method — or both — will work 95 percent of the time.”

Jerry Schulz in Milwaukee developed a ritual of his own to overcome insomnia. When he has trouble falling back to sleep late at night, he takes a mental journey to another city. To make himself sleepy, he thinks about the trip in painstaking detail. He visualizes himself packing his luggage, walking down his steps, loading his car, pulling out of his driveway and driving along familiar highways to get to Seattle, Portland or San Francisco.

“Part of the trick is you want to make an itinerary that is going to take awhile to play out,” he said. “But oddly, to make this work, you don’t actually want to get to your final destination — you want to fall asleep along the way. This is the one time when falling asleep at the wheel is a good thing.”

For most people, occasional bouts of insomnia are normal. But when sleeplessness occurs at least three nights a week for three months or longer, sleep experts refer to it as chronic insomnia. When that happens, it might help to see a sleep doctor to find out if you have an underlying health issue.

Some people experience insomnia because of medical conditions like sleep apnea, which causes intermittent pauses in breathing throughout the night. Others have restless legs syndrome, which causes an irresistible urge to move the limbs. Many women going through menopause have difficulty sleeping because of hot flashes, night sweats and hormonal fluctuations. A sleep doctor can help to diagnose these and other issues and provide medical treatments, medications or psychological interventions like cognitive behavioral therapy.

A number of people who were plagued by insomnia told us that their sleep only improved after they discovered they had an underlying condition. Among them was Julie Zuckman in Massachusetts, who for years would wake up at 3 a.m. multiple nights a week and struggle to fall back to sleep. Then she went to a sleep doctor and learned she had moderate sleep apnea, which she now treats with a CPAP machine that improves her breathing while she sleeps. Ms. Zuckman now gets roughly six to eight hours of uninterrupted sleep most nights. “As a side benefit for my husband, I also no longer snore,” she said.

The American Academy of Sleep Medicine maintains a directory of sleep centers on its website, which can help you find a local clinic if you suspect you have a sleep disorder.

For many people who wrestle with occasional insomnia, the cause of their sleep woes is often psychological: They wake up at night and their minds start racing. They look at the clock and worry that they won’t fall back to sleep. Or they start thinking about work, relationships, their finances or other things that cause them anxiety. This activates the body’s fight-or-flight response, causing a surge of adrenaline that prevents them from becoming relaxed enough to fall back to sleep.

Not surprisingly, the strategies people use to quash their insomnia often work by shifting their attention from stressful thoughts to pleasant ones. Hilary Collins in Philadelphia told us that she alleviates her insomnia by reminiscing about her childhood, which focuses her mind on soothing memories. “In my mind, I take a tour of my childhood home and I quickly fall asleep,” she said. Others told us they conjure up similarly nostalgic memories: They picture themselves in a former school or library they used to frequent and visualize small details such as the wallpaper, a stack of books or a collection of framed photographs.

If you find yourself routinely kept awake by anxiety, one potential solution is cognitive behavioral therapy, a form of treatment that helps address the underlying thoughts and behaviors that can cause insomnia. Any sleep clinic can connect you to a cognitive behavioral therapist. You can also download a free app developed by the federal government, called CBT-i Coach, that will teach you psychological strategies to alleviate your insomnia. “Cognitive-behavioral therapy for insomnia helped me immensely,” said a reader named Matteo in Chicago.

Lull yourself to sleep.

Others told us that they make themselves sleepy by listening to audiobooks, Gregorian chants, BBC Radio, sleep apps like Calm, or the tranquil, underwater sounds of whales. “Whales talking at low volume seems to do the trick for me,” one reader told us. Another said he prefers classical music. “If I lay awake, at least I get a little taste of culture,” he said.

You can also try breathing exercises to help you get relaxed. One popular exercise is the 3-4-5 technique. It involves breathing in for three seconds, holding your breath for four seconds, and then slowly exhaling to the count of five.

Another suggestion: Make sure your bedroom isn’t too warm. Keeping your space fairly cool, ideally between 60 and 68 degrees Fahrenheit, can promote better sleep.

Bore yourself to sleep.

For some of our readers, the most effective sleep aid at 3 a.m. is a boring book or pleasant sound. Several told us that these distractions stop them from thinking about the state of the world and getting agitated.

Karen Sandness in Minneapolis said that anytime she wakes up in the middle of the night she grabs a nonfiction book, “preferably a difficult and detailed one.” With the right book, she said, “there’s none of the ‘I can’t wait to see what happens next’ problem. The book will fall out of my hands and onto my face after a couple of pages.”

A few of the methods we heard about might raise some eyebrows among sleep experts. Susan L. Paul, a retired nurse in Asheville, N.C., told us that when she finds herself awake in the middle of the night, she brings her laptop into bed and watches the “Great British Baking Show” on Netflix.

Sleep doctors typically urge people not to use computer screens in bed because they emit sleep-disrupting blue light. But Ms. Paul likes to bake, and she finds that watching her favorite baking show has a calming effect that quickly sends her back to sleep. “It helps if you have seen it all at least a few times and remember the bakers as old friends,” she said. “It’s very relaxing, and I’m usually asleep again before the dough has a chance to rise a second time.” 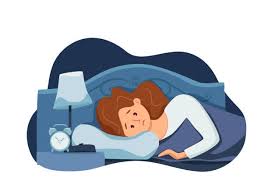 Food is something that many people told us they rely on. Juliet Jones in Memphis said that over the years she has tried various strategies to combat her occasional insomnia. She has counted sheep, taken melatonin, listened to calming music and used pleasant scents like lavender oil. But the only thing that seems to work for her is getting out of bed, going down to her kitchen and having a small glass of warm milk with a digestive biscuit, which she learned about as a child growing up in Britain.

Ms. Jones speculated that it works for her because she eats early dinners and tends to get hungry at night. Indeed, studies have shown that certain foods can impact how you sleep, including carbohydrates, which tend to help people fall asleep faster. “A little something bland in the stomach seems to do the trick,” she said. “This is what my father used to do, and now at age 70 so do I.”

Is your nightcap the cause of your insomnia?

In the food and drink department, a number of readers who grappled with insomnia told us that their sleep rapidlyimproved after they quit drinking alcohol. If you drink most nights of the week, it could be undermining your sleep. A nightcap or two might help you fall asleep faster. But it can also lead to more late-night awakenings. If you tend to drink in the evenings, try cutting back on alcohol for three to five days to see if it has an impact on the quality of your sleep.

“For years I would wake up in the middle of the night and stay awake for at least an hour, usually more,” said Brett Loomis in North Carolina. “Then I finally quit drinking all alcohol. It was the cause of my problem and I sleep much better now. So, if you’re reluctant to give up alcohol as I was, just try it for three days and see if it makes a difference. You might be surprised.”

Virus Where Restaurants Reopen or Mask Mandates Were Absent