As more people travel abroad, travelers and doctors need to be alert to unusual and often perplexing skin infections. 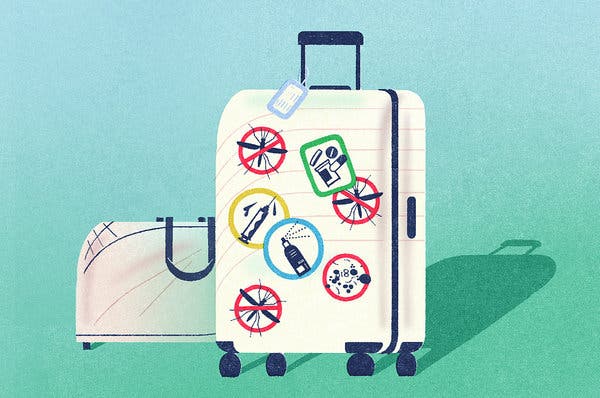 A 5-year-old girl was brought to the emergency room at Evelina London Children’s Hospital with itchy, rather unsightly sores on both legs. She had recently returned from a weekslong trip to Sierra Leone, and the lesions, which first appeared three weeks into her stay there, had become larger and ulcerated.

Diagnosis: cutaneous diphtheria, a disease rarely seen in many industrialized countries, including Britain and the United States, where most children are protected by the diphtheria toxoid vaccine, DTaP, and a booster shot of the tetanus-diphtheria-pertussis vaccine, Tdap.

Still, as more and more Americans of all ages travel abroad, often to less developed areas, travelers and doctors in this country need to be alert to unusual and often perplexing skin infections. Even though cutaneous diphtheria is not a notifiable disease here, between September 2015 and March 2018, four cases were reported to the Centers for Disease Control and Prevention.

The patients, two from Minnesota and one each from Washington and New Mexico, had recently returned from Somalia, Ethiopia, and the Philippines, respectively.

The C.D.C. noted in its weekly report in March that reported cases of this highly contagious infection had recently increased 10-fold, from an average of only three a year during the period 1998 to 2011, to 33 a year during 2012 to 2017. Still, the agency said, these numbers underestimate the true incidence of such infections. Although the four new cases were confined to the skin, the lesions can be a source of life-threatening respiratory infection in people not adequately immunized against diphtheria.

Thus, everyone who might have had close contact with the patients needed to be checked, perhaps treated with antibiotics, and if they lacked immunity to diphtheria, immunized with diphtheria toxoid-containing vaccine.

Before traveling to developing countries, people often check with the C.D.C. or a travel health clinic to determine what immunizations they may need to update and which health precautions — like drinking only bottled water — are recommended.

But having visited some pretty wild areas in the last five decades, I know that many people neglect to consult travel health experts in advance of their trips and are lax about updating needed vaccines. Upon returning home with a health complaint, they often consult physicians who may have never seen the condition before or even heard of it since medical school, if then.

While emerging diseases like SARS and Ebola rightly garner widespread attention, Dr. Jay S. Keystone of the Toronto Medisys Travel Health Clinic has noted that “skin problems are among the most frequent medical problems in returned travelers.” In a large series of traveler-related skin problems analyzed by the GeoSentinel Surveillance Network, Dr. Keystone reported that among ill travelers who sought medical care, cutaneous larva migrans, insect bites and bacterial infections were the most common disorders, making up 30 percent of 4,742 cases. He added that the reported cases did not include those that were easily treated during travel or that cleared up on their own — probably many more.

Chances are, when you go to less-developed lands, you’re most concerned about avoiding traveler’s diarrhea (try chewing two tablets of bismuth subsalicylate — Pepto-Bismol or generic versions — with each meal). But to help assure a medically uneventful trip, you’d be wise to remain alert to avoiding various bacterial, parasitic, viral and fungal infections that enter through the skin and are rarely encountered in the United States.

Cutaneous larva migrans, an extraordinarily itchy infection by the larval stage of hookworm, is most commonly acquired from dog or cat feces deposited on beaches of the Caribbean and Southeast Asia, Dr. Keystone said. Best protection: Don’t walk barefoot on the beach; wear water shoes, not sandals. The infection, should it occur, is now easily treated with oral antiparasitic drugs like albendazole or ivermectin.

Some infections are transmitted by the bite of mosquitoes, like malaria, dengue fever and filariasis, the risk of which often can be greatly reduced by diligent use of the insect repellents that can protect against various disease transmitters.

In an interview, Dr. Keystone, who wrote the chapter on the skin and soft-tissue infections in returned travelers in the C.D.C.’s travel health guide, called the Yellow Book, urged the use of either Icaridin (picaridin) or 50 percent Deet, both of which can provide up to 10 hours of protection. He said Icaridin is better tolerated; it smells better and is not greasy.

Most important, he said, is to use the repellent regularly, especially during the hours’ mosquitoes are most active, and apply it after putting on sunscreen, not before. These repellents can also protect against tick bites, which in this country and elsewhere can carry Lyme disease, among other miseries.

Also helpful is applying permethrin to one’s clothing and gear, including pants, socks, boots, and tent. Or purchase pre-treated clothing. The protection will last through multiple items of washing.

I once returned from a safari in Kenya with intensely itchy chigger bites on my legs, acquired while standing in tall weeds at the edge of a lake to photograph flamingoes. These tiny larvae, which hang out on leaves and branches, may also carry infectious bacteria that make people very sick, Dr. Keystone said.

Beach lovers who vacation in the Caribbean and other sandy areas (including along American shores) can be bitten by sand flies, so tiny they’re rarely seen. Though these flies usually cause no more than an extremely itchy bite, sometimes they carry a parasite that causes leishmaniasis that can infect internal organs as well as the skin. Deet is an effective repellent against sand flies, but it’s also a good idea to avoid beaches soon after rain.

Other helpful tips to avoid travel-related infections: Don’t touch, pet, handle or feed animals, including wild ones, strays, and other people’s pets. If at all possible, sleep in air-conditioned or screened rooms and use a bed net if you sleep in an area exposed to the outdoors.

Even the most prevention-conscious travelers are not guaranteed full protection against the myriad creatures that are waiting to dine on them. If your destinations include malaria areas, insect repellent is not enough. Taking an antimalarial drug is critical and should be started before your trip. For last-minute travelers, Malarone can be a good choice.

Finally, well in advance of traveling, make sure your vaccine protection is up-to-date. And in case some critter bites or burrows into you, pack some reasonable first-aid items, like antiseptic wipes, an antimicrobial ointment, an anti-itch cream with at least 1 percent hydrocortisone and perhaps an antifungal product, especially if you will be in remote areas.

Desperate for a Trip? Here Are the Questions to Ask Before You Go.

5 Things We Know About Flying This Summer