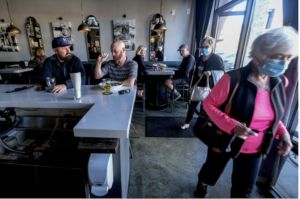 Even as officials in Texas and Mississippi lifted statewide mask mandates, researchers at the Centers for Disease Control and Prevention on Friday offered fresh evidence of the importance of face coverings, reporting that mask-wearing mandates were linked to fewer infections with the coronavirus and Covid-19 deaths in counties across the United States.

The study does not prove cause and effect, but the findings square with other research showing that masks prevent infection and that indoor spaces foster the spread of the virus through aerosols, tiny respiratory particles that linger in the air.

“You have decreases in cases and deaths when you wear masks, and you have increases in cases and deaths when you have in-person restaurant dining,” Dr. Rochelle P. Walensky, the director of the C.D.C., said on Friday. “And so we would advocate for policies, certainly while we’re at this plateau of a high number of cases, that would listen to that public health science.”

On Friday night, the National Restaurant Association, which represents one million restaurants and food service outlets, criticized the C.D.C. study as “an ill-informed attack on the industry hardest-hit by the pandemic.” It pointed out that researchers had not controlled for factors other than restaurant dining — such as business closures and other policies — that might have contributed to coronavirus infections and deaths.

“If a positive correlation between ice cream sales and shark attacks is found, that would not mean that ice cream causes shark attacks,” the association said in a statement.

The group also faulted federal researchers for not measuring compliance with safe operating protocols, and it noted that the research did not distinguish between indoor dining or outdoor dining, nor whether restaurants had adhered to distancing recommendations or had adequate ventilation.

“It is irresponsible to pin the spread of Covid-19 on a single industry,” the association said.

The findings come as city and state officials nationwide grapple with growing pressure to reopen schools and businesses amid falling rates of new cases and deaths. Officials have recently permitted limited indoor dining in New York City. On Thursday, Connecticut’s governor said the state would be ending capacity limits later this month on restaurants, gyms and offices. Masks are still required in both locales.

“The study is not surprising,” said Joseph Allen, an associate professor at Harvard’s T.H. Chan School of Public Health and director of the university’s Healthy Buildings program. “What’s surprising is that we see some states ignoring all of the evidence and opening up quickly, and removing mask mandates and opening full dining.”

Other researchers said the new study confirmed the idea that viral transmission often takes place through the air, that physical distancing may not be sufficient to halt the spread in some settings, and that masks at least partly block airborne particles.

President Biden’s health advisers have said in recent days that now is not the time to relax. As of Thursday, the seven-day average of new cases was still 62,924 a day, according to a database maintained by The New York Times.

While that figure is down 14 percent from two weeks earlier, new cases remain near the peaks reported last summer. Though fatalities have started falling, in part because of the vaccination campaigns at nursing homes, it remains routine for 2,000 deaths to be reported in a single day.

Mr. Biden on Wednesday criticized the decisions by the governors of Texas and Mississippi to lift statewide mask mandates and reopen businesses without restrictions, calling the plans “a big mistake” that reflected “Neanderthal thinking.”

The president, who has asked Americans to wear masks during his first 100 days in office, said it was critical for public officials to follow the guidance of doctors and public health leaders as the coronavirus vaccination campaign gains momentum. As of Thursday, about 54 million people had received at least one dose of a Covid-19 vaccine.

“It may seem tempting, in the face of all of this progress, to try to rush back to normalcy as if the virus is in the rearview mirror,” Andy Slavitt, a White House adviser on the pandemic, said on Friday. “It’s not.”