Dan Shapiro was the first person I knew to use medical marijuana. As a junior at Vassar College in 1987, he was being treated for Hodgkin’s lymphoma with potent chemotherapy that caused severe nausea and vomiting. When Dan’s mother learned that smoking marijuana could relieve the distressing side effect, to help her son, this otherwise law-abiding woman planted a garden full of the illegal weed in her Connecticut back yard.

Decades later, marijuana as medicine has become a national phenomenon, widely accepted by the public. Although the chemical-rich plant botanically known as Cannabis sativa remains a federally controlled substance, its therapeutic use is now legal in 36 states and the District of Columbia.

Yet experts in the many specialties in which medical marijuana is said to be helpful have only rarely been able to demonstrate its purported benefits in well-designed scientific studies. And they caution that what is now being legally sold as medicinal marijuana in dispensaries throughout the country is anything but the safe, pure substance Americans commonly expect when they are treated with licensed medications.

For example, in Oregon, where both recreational and medicinal marijuana can be sold legally, all recreational marijuana must be tested for pesticides and solvents, but such tests are not required for most medical marijuana, an audit by the Secretary of State published in January 2019 showed. The Oregon Health Authority does not require tests for heavy metals and microbes that might sicken users.

Indeed, most of the same health concerns raised decades ago about using marijuana therapeutically are still unresolved, even as the potency of the plant’s intoxicating ingredient, tetrahydrocannabinol, best known as THC, has increased fivefold. Furthermore, exclusive medical use is uncommon; in a Canadian study of 709 medical users, 80.6 percent also reported using marijuana recreationally.

“People are using a medical excuse for their recreational marijuana habit,” said Dr. Kenneth Finn, a pain management specialist in Colorado Springs and editor of a new, 554-page professional book on the subject, “Cannabis in Medicine: An Evidence-Based Approach.” 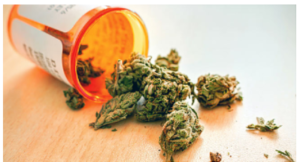 Proponents of medical marijuana argue that cannabis is relatively safe and less expensive than licensed pharmaceuticals and is often used for conditions for which effective therapies are lacking or inadequate. Opponents say that what is most lacking are standardized marijuana products and randomized controlled clinical trials that can clearly establish benefits and risks.

The evidence — or lack thereof — of health benefits that can be reliably attributed to smoking, vaping or ingesting marijuana, even in its purest form, is described in great detail in Dr. Finn’s book. “Components of the cannabis plant can help in various conditions, but that’s not what people are buying in stores,” he said in an interview. “Let’s do the research on purified, natural, noncontaminated cannabinoids,” as the various potentially therapeutic chemicals in marijuana are called.

Three such substances have been approved by the Food and Drug Administration. One, Epidiolex, a cannabidiol-based liquid medication, is approved to treat two forms of severe childhood epilepsy. The others, dronabinol (Marinol, Syndros) and nabilone (Cesamet), are pills used to curb nausea in cancer patients undergoing chemotherapy and to stimulate appetite in AIDS patients with wasting syndrome.

Another marijuana-based drug, nabiximols (Sativex), is available in Canada and several European countries to treat spasticity and nerve pain in patients with multiple sclerosis.

Medicinal cannabis is hardly a new therapeutic agent. It was widely used as a patent medicine in the United States during the 19th and early 20th centuries and was listed in the United States Pharmacopoeia until the passage of the Marijuana Tax Act in 1937 rendered it illegal.

Then a federal law in 1970 made it a Schedule 1 controlled substance, which greatly restricted access to marijuana for legitimate research. Also complicating attempts to establish medical usefulness is that plants like marijuana contain hundreds of active chemicals, the amounts of which can vary greatly from batch to batch. Unless researchers can study purified substances in known quantities, conclusions about benefits and risks are highly unreliable.

That said, as recounted in Dr. Finn’s book, here are some conclusions reached by experts about the role of medical marijuana in their respective fields:

People using marijuana for pain relief do not reduce their dependence on opioids. In fact, Dr. Finn said, “patients on narcotics who also use marijuana for pain still report their pain level to be 10 on a scale of 1 to 10.” Authors of the chapter on pain, Dr. Peter R. Wilson, pain specialist at the Mayo Clinic in Rochester, Minn., and Dr. Sanjog Pangarkar of the Greater Los Angeles V.A. Healthcare Service, concluded, “Cannabis itself does not produce analgesia and paradoxically might interfere with opioid analgesia.” A 2019 study of 450 adults in the Journal of Addiction Medicine found that medical marijuana not only failed to relieve patients’ pain, it increased their risk of anxiety, depression and substance abuse.

Dr. Allen C. Bowling, theneurologist at the NeuroHealth Institute in Englewood, Colo., noted that while marijuana has been extensively studied as a treatment for multiple sclerosis, the results of randomized clinical trials have been inconsistent. The trials overall showed some but limited effectiveness, and in one of the largest and longest trials, the placebo performed better in treating spasticity, pain and bladder dysfunction, Dr. Bowling wrote. Most trials used pharmaceutical-grade cannabis that is not available in dispensaries.

The study suggesting marijuana could reduce the risk of glaucoma dates back to 1970. Indeed, THC does lower damaging pressure inside the eye, but as Drs. Finny T. John and Jean R. Hausheer, ophthalmologists at the University of Oklahoma Health Sciences Center, wrote, “to achieve therapeutic levels of marijuana in the bloodstream to treat glaucoma, an individual would need to smoke approximately six to eight times a day,” at which point the person “would likely be physically and mentally unable to perform tasks requiring attention and focus,” like working and driving. The major eye care medical societies have put thumbs down on marijuana to treat glaucoma.

Allison Karst, a psychiatric pharmacy specialist at the V.A. Tennessee Valley Healthcare System, who reviewed the benefits and risks of medical marijuana, concluded that marijuana can have “a negative effect on mental health and neurological function,” including worsening symptoms of PTSD and bipolar disorder.

Dr. Karst also cited one study showing that only 17 percent of edible cannabis products were accurately labeled. In an email she wrote that the lack of regulation “leads to difficulty extrapolating available evidence to various products on the consumer market given the differences in chemical composition and purity.” She cautioned the public to weigh “both potential benefits and risks,” to which I would add caveat emptor — buyer beware.

Do Lox and Other Smoked Fish Increase Cancer Risk?