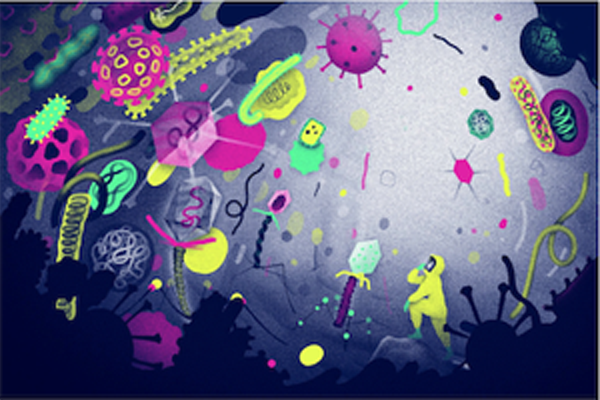 Welcome to the Virosphere

SARS-CoV-2, the cause of the pandemic, belongs to one of 6,828 named species of virus. Hundreds of thousands more species are known, with perhaps trillions waiting to be found.

In January, Chinese virologists isolated the virus that causes Covid-19. Earlier this month, a team of virologists gave this new virus a new name: SARS-CoV-2.

To do so, they had to move the virus to the head of a very, very long line.

In recent years, scientists have discovered that the world of virus diversity — what they sometimes call the virosphere — is unimaginably vast. They have uncovered hundreds of thousands of new species that have yet to be named. And they suspect that there are millions, perhaps even trillions, of species waiting to be found.

“Suffice to say that we have only sampled a minuscule fraction of the virosphere,” said Edward Holmes of the University of Sydney in Australia.

With the discovery of viruses in the late 1800s, scientists soon recognized that different species caused different diseases — rabies and influenza, for example. Later, virologists learned how to recognize new kinds of viruses by growing them in labs, where subtler biological features emerged.

After decades of this painstaking work, virologists have officially named 6,828 species of viruses. That’s a paltry count when you consider that entomologists have named 380,000 species of beetles alone.

But in recent years, virologists have changed the way they hunt. Now they look for bits of genetic material in samples — water, mud, blood — and use sophisticated computer programs to recognize viral genes.

Matthew Sullivan, a virologist at Ohio State University, has used this method to search for viruses that infect life in the ocean. He and his colleagues analyzed genetic material in seawater collected on a scientific voyage around the world. Some genes belonged to species already known to science. But many were new. In 2016, Dr. Sullivan and his colleagues reported over 15,000 viruses, each representing a new species.

That was more than twice as many species as all the previously identified viruses. And with that, Dr. Sullivan thought he and his colleagues had pretty much finished off the diversity of viruses in the sea. But they went on collecting more water, and invented new ways to search it for the genetic material of viruses. In 2019, they reported finding a total of 200,000 species.

Other researchers are discovering thousands of new viruses as well. “Right now, we are in the exponential phase,” said Dr. Jens H. Kuhn, the lead virologist at the Integrated Research Facility at Fort Detrick in Maryland. “If someone gives me a million dollars and I go out and sample sea cucumbers, I will present you with 10,000 new viruses.”

Formally describing a new virus remains a time-consuming task. When Chinese researchers isolated the Covid-19-causing virus earlier this year, they found that it had a distinctive crown of proteins. This hallmark told them that the virus belonged to the coronavirus family, which contains 39 known species. The World Health Organization used this finding to give the disease its name — Coronavirus Disease 2019, or Covid-19 for short.

To determine just what kind of coronavirus they were dealing with, virologists sequenced its genes. The virus was genetically similar to the one that caused the SARS outbreak in 2002. In March, the International Committee on Taxonomy of Viruses declared that the two viruses belonged to the same species. The virus that caused SARS is known as SARS-CoV. So they called the Covid-19-causing virus SARS-CoV-2.

The viruses that infect humans are the best understood of all. But only about 250 species of viruses choose us as their host — “an insignificant fraction of the virosphere infect humans,” Dr. Holmes said.

Bacteria and other single-celled microbes belong to a group called prokaryotes. In a paper published on March 4 in Microbiology and Molecular Biology Reviews, Dr. Kuhn and his colleagues argued that there are, at minimum, 100 million species of viruses that infect prokaryotes.

For each of those species, scientists will have to figure out how it is related to other viruses. That is far harder to determine for viruses than for familiar life-forms like animals and plants.

Scientists who study animals and plants can rely on the tried and true classification system first established by Carl Linnaeus in the 1700s. Our species belongs to the class Mammalia, for instance, and, above that, the animal kingdom. Virologists have struggled to figure out the classes and kingdoms of the virosphere. Part of the problem is that viruses have a penchant for trading genes with other species, making it hard to draw bright lines between groups of them.

And very often, a new virus simply makes no sense. An extreme example came to light in February when scientists searching for viruses in a lake found a new one they named Yaravirus. Of Yaravirus’s 74 genes, 68 are unlike any ever found in any virus.

In recent years, Dr. Kuhn and his colleagues have sought to tame this chaos. They have developed what they call a “megataxonomy” to classify viruses that seems to work. The team sorted viruses based on whether they carried one or more of a few “hallmark genes.” They also looked for groups of species that trade genes among each other, and less so with other groups.

“A coherent account of the global organization of the virus world is now within reach,” they wrote in their new paper. Dr. Kuhn, in an interview, said, “We were all a bit surprised this system is so logical in the end.”

Dr. Kuhn and his colleagues submitted their system to the Internal Committee on the Taxonomy of Viruses, which oversees how virologists classify viruses. Dr. Kuhn said that would likely be accepted soon. Still, the megataxonomy is far from complete. Yaravirus, for instance, still floats on its own, lonely and unclassifiable.

Some researchers are skeptical about the megataxonomy. Dr. Holmes thinks it is too soon to attempt one, given that researchers have found so few viruses. “Why build something so rigid when it may just fall as we sample more?” he asked. Dr. Kuhn argues that it’s worth starting to build a system, even if it needs to be adjusted later.

Making sense of the virosphere is not just an intellectually challenging puzzle, Dr. Kuhn said. At Fort Dietrick, he runs experiments on some of the world’s most dangerous viruses, such as Ebola and SARS-CoV-2. A better understanding of the virosphere could help him and his colleagues come up with ways to combat these threats and others we don’t even know about yet.

“We have to understand what is out there,” he said.

Message in ASL about Coronavirus