A body in motion will age better than one on the couch. Consider these tips for exercise as you age.

High-intensity interval training is less intimidating than it sounds. It just means repeating short bursts of all-out exercise with longer periods of easy recovery. In recent years, high-intensity interval training has generated considerable attention among exercise scientists because this type of workout seems to help people of any age and any fitness level become healthier. A number of studies have shown that our bodies get more out of interval training compared with slow-and-steady exercise. A Mayo Clinic study of 72 healthy but sedentary men and women who were randomly assigned to different exercise groups or a control group found that interval training actually led to changes in muscles at the cellular level, essentially reversing the natural decline that occurs with aging. Even if you’re not an exerciser, it’s not too late to start. In the study, older people’s cells responded more robustly to intense exercise than the cells of the young did.

A typical high-intensity workout lasts less than 15 minutes, including a warm-up and cool-down, but has been shown in multiple studies to provide health and fitness benefits that are the same as or greater than an hour or more of continuous and relatively moderate exercise.

Weight lifting can help you maintain muscle mass and stronger bones as you age. And the good news is you don’t have to lift weights like a body builder to reap the benefits.

In traditional weight training programs, we are advised to first find the heaviest amount of weight that we possibly can lift one time. This is our one-repetition maximum weight. We then use this to shape the rest of the program by lifting 80 to 90 percent of that amount eight to 10 times, until our affected arms or legs shake with fatigue.

But recently scientists compared the traditional weight training with a lighter routine. The weight was set between 30 and 50 percent of each person’s one-repetition maximum, and the study subjects lifted them as many as 25 times, until the muscles were exhausted.

The scientists found that there was no difference between groups. The light weight lifters grew just as fit and strong as the heavy weight lifters. The key for both groups was to grow tired. The volunteers in both groups had to attain almost total muscular fatigue in order to increase their muscles’ size and strength.

Strength training can also help keep you from slowing down. Focus on strengthening muscles in the calves and ankles. The American Academy of Orthopaedic Surgeons has some suggested exercises. 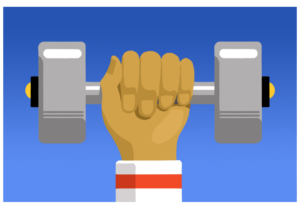 Exercise not only helps keep the inside of your body healthy, it also appears to slow and even reverse the effects of aging on your most visible organ — the skin.

After about age 40, most of us begin to experience a thickening of our stratum corneum, the final, protective, outer layer of the epidermis, itself the top layer of your skin. The stratum corneum is the portion of the skin that you see and feel. Composed mostly of dead skin cells and some collagen, it gets drier, flakier and denser with age.

At the same time, the layer of skin beneath the epidermis, the dermis, begins to thin. It loses cells and elasticity, giving the skin a more translucent and often saggier appearance. These changes are independent of any skin damage from the sun. They are solely the result of the passage of time.

But exercise may help change that. In one study of volunteers, ages 20 to 84, researchers studied skin samples. They found that after age 40, the men and women who exercised frequently had markedly thinner, healthier stratum corneums and thicker dermis layers in their skin. Their skin was much closer in composition to that of the 20- and 30-year-olds than to that of others of their age, even if they were past age 65.And they also found that prescribing exercise can change skin quality. Volunteers aged 65 or older began working out twice a week by jogging or cycling. After three months, scientists studied before and after skin samples. Exercise had produced distinctive changes in the skin samples, which now resembled those of 20- to 40-year olds.

And don’t forget, one of the simplest steps you can take to protect your skin is to wear sunscreen when you are exercising or spending time outside.

Aerobic fitness — measured as VO2 Max — can be an indicator of longevity. A scientific statement from the American Heart Association points out that fitness can be a better indicator of someone’s risk for heart disease and early death than such standard risk factors as smoking, obesity and high blood pressure.

Aerobic, or cardiorespiratory, fitness is a measure of how well your body can deliver oxygen to tissues. Because that process is pervasive and essential within our bodies, it is also a “reflection of overall physiological health and function, especially of the cardiovascular system,” according to the report.

Many past studies have found that relatively low aerobic fitness is linked with a significantly increased risk for heart disease and premature death, and that being out of shape may, in fact, represent a greater risk for developing heart disease than if you have a poor cholesterol profile, Type 2 diabetes, a history of smoking or a high body mass index.

You can test your fitness age using an online fitness calculator based on data from millions of users at www.worldfitnesslevel.org. The result will either make you feel great about your health or it may give you the dire warning that you’ve got the fitness level of someone 20 years older. To take the test, be prepared to measure your waist, note your weight and height and take your resting pulse rate.

The Lies We Tell Our Doctor

7 Things You Never Clean (But Should!)