One day in March of 2020, Rosemary Bily suddenly grew so tired she could barely get out of bed. “She slept a lot,” said her son-in-law Rich Lamanno. “She was wiped out for most of a month.” Ms. Bily, now 86, also developed nausea and diarrhea, along with a slight cough, and subsisted mostly on Tylenol and Gatorade.

Had it not been for a family gathering a few days earlier, the children of the Bilys would not have suspected the new coronavirus. They might have blamed the flu, or simply advancing age. “What we heard on TV was ‘high fever, can’t breathe’ — and they had neither,” Mr. Lamanno recalled.

But about a dozen guests had gathered at a restaurant in Rockville Centre, Long Island, earlier that month to celebrate a niece’s birthday, and one by one most of them fell ill with Covid, including Mr. Lamanno and his wife.

As the symptoms spread, doctors told the worried family that the Bilys most likely had Covid-19. Because tests were in short supply at the time, neither was tested; the family also feared taking them to overflow local hospitals. But subsequ 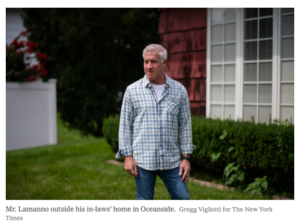 ent antibody tests confirmed that Eugene and Rosemary Bily, who live in Oceanside, N. Y., had contracted and survived the virus.

The population over 65, most vulnerable to the virus’s effects, got an early start on Covid vaccination and has the highest rate in the country — more than 80 percent are fully vaccinated. But with infections increasing once more, and hospitalization rising among older adults, a large-scale new study in the Journals of Gerontology provides a timely warning: Covid can look different in older patients.

“People expect fever, cough, shortness of breath,” said Allison Marziliano, lead author of the study. She is a social and health psychologist at the Feinstein Institutes for Medical Research, part of the large Northwell Health system across New York State.

But when the researchers combed through the electronic health records of nearly 5,000 people, all over the age of 65, who were hospitalized for Covid at a dozen Northwell hospitals in March and April of 2020, they found that one-third had arrived with other symptoms, unexpected ones.

The team, searching through records using language software, found that about one-quarter of older patients reported a functional decline. “This was falls, fatigue, weakness, difficulty walking or getting out of bed,” Dr. Marziliano said.

The rate of atypical symptoms rose significantly with age, affecting about 31 percent of those aged 65 to 74, but more than 44 percent of those over 85. These symptoms occurred more commonly in women, in Black patients (but not in Hispanics) and in those who had other chronic diseases, particularly diabetes or dementia.

Because people in the atypical group were less likely to experience breathing problems and require ventilation, they were less likely to need intensive care. But both groups spent about 10 days in the hospital, and roughly one-third of each group died.

“These people were in the hospital for as long,” Dr. Marziliano said. “Their mortality rate was as high. So this shouldn’t be dismissed.”

The research mirrors findings from other, smaller studies of older people conducted early in the pandemic in the United States and Europe. Du 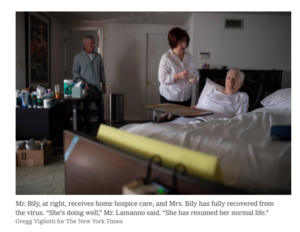 ring a Covid outbreak in a nursing home in Providence, R.I., for instance, a Brown University study found that the most common symptom was loss of appetite, followed by lethargy, diarrhea and fatigue.

“We’re not necessarily surprised by this,” said Dr. Maria Carney, a geriatrician and an author of the Northwell study. “Older adults don’t always present like other adults. They may not mount a fever. Their metabolisms are different.”

Younger diabetics, for instance, may become sweaty and experience palpitations if their blood sugar falls, Dr. Carney explained. An older person with low blood sugar could faint without warning. Older people who suffer from depression may have appetite loss or insomnia but not necessarily feel sad.

In May of 2020, Dr. Carney heard from a daughter worried about her mother, who was in her 80s and had suddenly grown weaker. “She didn’t have a fever or a cough, but she was just not herself,” Dr. Carney recalled. Doctors at a local emergency room had diagnosed a urinary tract infection and prescribed antibiotics, the daughter reported. But five days later, her mother’s condition was worsening. “She needs a Covid test,” Dr. Carney advised.

Diagnosing Covid quickly in older patients can make a world of difference. “We have things to offer now that we didn’t have in the first wave,” said Dr. Eleftherios Mylonakis, chief of infectious diseases at Warren Alpert Medical School of Brown University, who led the Providence nursing home study. “We have a better understanding, more treatments, better support.”

Among the improvements: using anticoagulant drugs to prevent clotting and using monoclonal antibodies (the treatment that former President Trump received at Walter Reed Hospital) that strengthen the immune system. But, Dr. Mylonakis added, “It’s paramount to start any kind of treatment early.”

Understanding that something as vague as weakness, confusion or appetite loss might signal a Covid infection can also help protect friends and family, who can then isolate and get tested themselves. “It not only helps the individual but also can contain the spread of the virus,” Dr. Mylonakis said.

A Covid diagnosis can also ward off needless tests and procedures. “We can avoid unnecessary testing, poking and prodding, CT scans,” Dr. Carney said. CT scans are expensive, burdensome and take time to schedule and analyze; a nasal swab for Covid is quick, relatively cheap and now widely available.

What Does the Aspirin News Mean for Me?