What’s the best way to develop a healthy perspective on old age? Spend more time with elderly people and discover what brings meaning and pleasure to their twilight years despite the losses, both physical and social, they may have suffered.

That’s what two authors of inspired and inspiring books about aging discovered and, happily, have taken the trouble to share with those of us likely to join the ranks of the “oldest old” in the not-too-distant future. Actually, the wisdom therein might be equally valuable for young and middle-aged adults who may dread getting old. To their detriment, some may even avoid interacting with old people lest their “disease” rub off on them.

Too many in our youth-focused culture currently regard the elderly with fear or disdain and consider them costly consumers of resources with little to offer in return. Given the explosive pace of technology that often befuddles the elderly, they command little or no respect for the repository of wisdom that was once cherished by the young (and still is in some traditional societies).

The first book I read was “The End of Old Age” by Dr. Marc E. Agronin, a geriatric psychiatrist at the Miami Jewish Home whose decades of caring for the aged have taught him that it is possible to maintain purpose and meaning in life even in the face of significant disease and disability, impaired mental and physical functioning and limited participation in activities.

The second book, “Happiness Is a Choice You Make,” was written by John Leland, a reporter for The New York Times who spent a year interviewing and learning from six of the city’s “oldest old” residents — people 85 and above — from diverse cultures, backgrounds and life experiences.

As Mr. Leland told me, “These people totally changed my life. They’ve given up distractions that make us do stupid things and instead focus on what’s important to them. To a person, they don’t worry about things that might happen. They worry when it happens, and even then they don’t worry. They just deal with it. At whatever age we are, we can choose to adapt to whatever happens. We have influence over whether we let things knock us out.”

After reading the books, I have a new way of looking at myself: as a “good-enough” aging adult who continues to pursue and enjoy a variety of activities commensurate with the limitations imposed by inevitable changes in body and mind that accrue with advancing years.

Never mind that words or spelling may temporarily escape me. I can always ask Google or Siri to fill in the blanks. I love the story in Dr. Agronin’s book about the renowned pianist Arthur Rubinstein “who dealt with age-induced declines in his skills by selecting a more limited repertoire, optimizing his performance through extra practice, and compensating by altering his tempo during certain sections to highlight the dynamics of a piece.”

Dr. Agronin writes with reverence for Dr. Gene D. Cohen, a founding father of geriatric psychiatry who “saw no 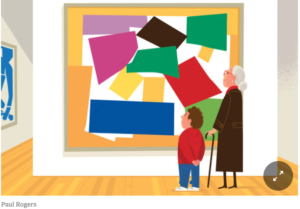 t only what aging is, but what aging could be; not what we accomplish in spite of aging, but because of aging.” In Dr. Cohen’s model of creative aging, people have the potential to see possibility instead of problems; aging itself can be a catalyst for rich new experiences, offering a way to renew passions and reinvent oneself.

There are activities I once loved that I can no longer do, or necessarily want to do, like tennis, skiing and ice skating. But I can still walk, cycle, swim, and frolic with my dog, activities that have resulted in many unexpected pleasures and new friends. I can accompany my grandsons to museums and delight in their knowledge of the Impressionists they studied in a high school art class. When I gave them tickets to join me at the opera, one said with a grin, “I guess I’ll get some culture.”

I already know that if and when my physical abilities become further curtailed, I can still enjoy meaningful conversations with these boys, who are all too quickly becoming young men. They may know how to reset my cellphone or find hidden channels on my television, but I can help them put their life experiences in perspective and support a decision to leave their comfort zone and take risks that offer growth potential.

As one of Dr. Agronin’s youngest informants said, even when physical decline and losses restrict one’s options, there remains the capacity to appreciate and approach each day with a sense of purpose. “It’s all about how you frame what you have,” she told him.

He cites the concept of “positive aging” developed by Robert D. Hill, a psychologist in Salt Lake City, that is “affected by disease and disability, but not contingent upon avoiding it.” Rather, it is “a state of mind that is positive, optimistic, courageous, and able to adapt and cope in flexible ways with life’s changes.”

Or, as Dr. Cohen found, creativity is not limited to young people. At any age, it can open people up to new possibilities and add richness to life. According to Dr. Cohen, creativity can benefit aging by strengthening morale, improving physical health, enriching relationships and establishing a legacy.

Dr. Agronin cites two notable examples: Henri Matisse — “the man who rose from the dead” after cancer surgery in 1941 — who created cutouts when he could no longer paint, and Martha Graham, who reinvented herself as a choreographer when she could no longer dance.

When we become unable to pursue the roles and passions of our younger years, Dr. Agronin says, we can tap into our past for strength and inspiration. We can try something new that is either an extension of what we did before or that takes us in a new direction.

And, as Mr. Leland found, there is no room for regrets in happy aging. Although I never won a Pulitzer Prize, in many ways, the “awards” I’ve gotten from thousands of grateful readers who’ve been helped by my writings over the last half-century are so much more meaningful. These readers inspire me to continue doing what I do best — providing people with health- and lifesaving information and inspiration based on the best scientific evidence currently available.

Citing the work of Laura L. Carstensen, founding director of the Stanford Center on Longevity, Mr. Leland writes that “older people, knowing they face a limited time in front of them, focus their energies on things that give them pleasure in the moment,” not on a future that may never be.