The popular cooking website will not publish new beef recipes over concerns about climate change. “We think of this decision as not anti-beef but rather pro-planet,” an article said.

Could an empire of the kitchen quietly stop cooking with beef and leave no one the wiser?

That appears to be the feat accomplished by Epicurious, the popular online recipe bank where home cooks have gone to hone their skills for a quarter of a century. The editors there revealed to readers this week that not only were they done with new recipes containing beef, but they had been phasing them out for over a year.

“We know that some people might assume that this decision signals some sort of vendetta against cows — or the people who eat them,” Maggie Hoffman, a senior editor, and David Tamarkin, a former digital director, wrote in an article published on Monday. “But this decision was not made because we hate hamburgers (we don’t!).”

The shift was “solely about sustainability, about not giving airtime to one of the world’s worst climate offenders,” they said. “We think of this decision as not anti-beef but rather pro-planet.”

The shift means no new recipes for filet or stroganoff, classic carpaccio or faithful meatloaf on the home page. No brisket, rib-eye, sirloin, flank or any of the other primal cuts on the site’s Instagram feed. Expect to substitute mushrooms into the cheesesteaks, seitan for French dip, tofu for stews and chicken for lo mein. But don’t expect any new twists on chile-braised short ribs. The future of burgers, here at least, looks like turkey, beans, Impossible and Beyond. 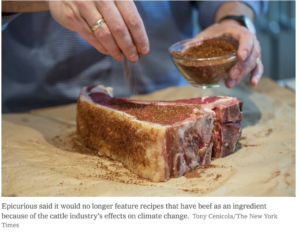 Existing beef recipes will remain available, including the succulent Steak Diane on Instagram, a list of 73 ways to make a steak dinner “110 Percent Beefier,” and a “steakburger” on its list of 50 most popular recipes of all time.

But the days of new beef are officially done.

The news was not received well across the wide plains and deep warrens of the internet where people share pictures of their food and judge one another’s diets. Animal lovers said the policy did not go far enough. “If you’re really concerned about animal welfare, you’d stop publishing recipes that include chicken (which imposes far more sentient suffering per pound of meat than beef does),” one Twitter critic observed.

Others argued it would be worse for the climate: “Are you insane?” one person responded. “If you take cattle away from ranches the land will be sold and it will be developed for housing. Not pro-planet at all.”

The North American Meat Institute, a trade association, was comparatively restrained. “The real question should be how excluding America’s favorite food impacts Epicurious,” said Sarah Little, a spokeswoman for the group. “Perhaps the reduced web traffic will save some electricity.”

Still, droves of home cooks praised the shift. “I’ve really been loving the diversity of your recipes over this past year (especially since I’ve been cooking even more at home),” a Facebook user remarked.

The move was also applauded by People for the Ethical Treatment of Animals, which called it a “terrific” first step. “To truly combat deforestation, greenhouse-gas emissions, and drought, it needs to take all meat and dairy off the table, too,” it said in a statement.

Noticeably absent from the conversation was any bold, brazen outrage from top chefs and social-media-savvy cooks. Could America, where ranchers took “Beef: It’s What’s for Dinner” to the Supreme Court, really be over its love affair with beef?

“This is a trend toward considering meat an obsolete food,” said Nina Teicholz, the executive director of The Nutrition Coalition and an advocate for diets low in carbohydrates and high in fat. “Epicurious is just one website, but it’s the constant repetition.”

There are more than 300,000 recipes on Epicurious, many with vegetarian substitutions or meat alternatives to beef. Recipes published in place of beef-based dishes have struck a chord with readers, according to the site.

“The traffic and engagement numbers on these stories don’t lie: When given an alternative to beef, American cooks get hungry,” the company said.

Bon Appétit, a sister brand of Epicurious at Condé Nast, did not immediately respond to questions about whether it would or had made similar changes.

Maile Carpenter, the editor in chief of the Food Network Magazine, another prominent cooking outlet, said in a statement that it had not changed its recipe development regarding beef.

“We’re all about balance,” she said, describing a planned summer issue that would feature a burger on the cover with recipes inside for veggie burgers and dishes with shrimp, fish and chicken with vegetable sides. “Our goal is to provide a range of content so readers can make their own choices.”

Epicurious said the decision to publicize its shift was connected to a recent increase in beef consumption although overall beef consumption is lower than it was 30 years ago. “The conversation about sustainable cooking clearly needs to be louder; this policy is our contribution to that conversation,” the brand said.

The announcement also pointed to data from the Food and Agriculture Organization of the United Nations that said nearly 15 percent of greenhouse gas emissions globally come from livestock. Cattle is responsible for the most emissions, the organization said, representing about 65 percent of the livestock sector’s emissions.

The average American consumes almost 215 pounds of meat — beef, pork, poultry and lamb — per year, according to 2016 data from the Organization for Economic Cooperation and the Food and Agriculture Organization.

If everyone in the United States reduced consumption of beef, pork and poultry by a quarter and substituted plant proteins, according to a 2019 study, the country would save about 82 million metric tons of greenhouse gas emissions per year, a reduction of a little more than 1 percent.

Studies have also suggested that consuming less meat may have health benefits and that the consumption of red meat and processed meats was linked to heart disease, cancer and other illnesses. However, that guidance may be fading. A 2019 report suggested that the advice is not backed by good scientific evidence, with researchers saying that if there are health benefits from eating less beef and pork, they are small.

Ms. Teicholz said that beef, especially ground beef, was one of the cheapest proteins available, calorically efficient and held nutrients that could not be absorbed from meat replacements.

Epicurious said in its announcement that its “agenda” would remain the same — “to inspire home cooks to be better, smarter and happier in the kitchen” — but that it now believed in cooking with the planet in mind. “If we don’t, we’ll end up with no planet at all,” it said.

Common Home Accidents for the Elderly and How to Prevent Them

For Seniors Especially, Covid Can Be Stealthy