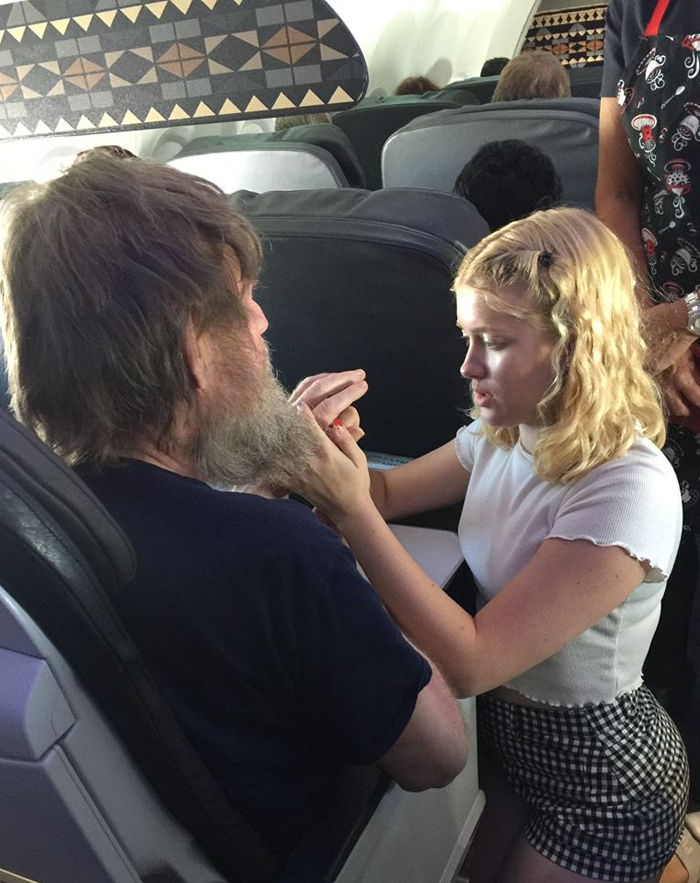 Clara Daly was traveling with her mother Jane from Boston to Los Angeles on an Alaska Airlines flight earlier this week. During the six-hour flight that included a layover in Portland, Oregon, Clara volunteered her skills in sign language to help a blind and deaf man by forming letters with her fingers while he “read” them with his hands.

The flight attendants were looking for someone who could communicate with Tim Cook, a blind and deaf man who was on his way to Portland after visiting his sister in Boston.

Clara used fingerspelling to help Cook throughout the flight.

“I went to [Cook] a total of three times, once to get him water, another to tell him the time, and the last hour of the flight to just talk to him,” Clara said.

During their conversation, in which Clara had to sign each letter in every word so that Cook could feel her hands, the teenager learned about Cook’s past as a salesman, and he asked her about her life.

“We talked about our family in Massachusetts and he asked me about my plans for my future,” Clara said.

Clara’s generosity didn’t go unnoticed. A passenger named Lynette Scribner took a photo of one of the moments Clara was communicating with Cook and shared it on Facebook. The post has been shared nearly 500,000 times.

“There are still good, good people who are willing to look out for each other,” was one of the things Scribner wrote.

Alaska Airlines also took notice. In a blog post, the airline quoted one of the flight attendants, who said “[Cook] was very excited to have someone he could speak,” adding Clara was “an angel.”

The airline said Cook is a resident of a senior living community and a service provider for the facility met him at the gate after the flight arrived in Portland.

Clara, who lives in Calabasas, California, says the reaction on social media has been “overwhelmingly lovely.”

“I hope this helps other people realize that in the world we are living in, it is everyone’s duty to help each other out, no matter what,” she added.