Humanity’s love of eating animals should worry you, even if humans are the only animals you care about. Meat and dairy production is responsible for 14.5 percent of the planet’s greenhouse gas emissions, with about two-thirds of those coming from cattle. To keep global warming below two degrees Celsius above preindustrial levels, the limit established by the Paris climate accord, the World Resource Institute says much of the wealthy world needs to cut its beef and lamb consumption by 40 percent — and that’s on the low end of such estimates.

Americans are among the top eaters of beef in the world, and persuading them to cut down on it or swap plant-based burgers for their steaks is a challenge.

Enter lab-grown — or, as some prefer, “cultured” or “cultivated” — meat: In the past few years, a small but fast-growing industry has sprung up with a mission to create meat from cell lines that doesn’t just taste like meat but actually is meat. Last year, a restaurant in Singapore even put lab-grown chicken on its menu.

As the sector has bloomed, so too have predictions of its imminent usurpation of meat of the slaughter-requiring variety. But how close are we really to that future, and is it the one we should be aiming for in the first place? Here’s what people are saying.

The urgency of reducing meat consumption

Vexing as the problem beef poses for climate change mitigation already is, it’s going to get worse. That’s because the world is getting richer, and when people get richer, they eat more meat.

“The 7.8 billion of us on this planet cannot have a steak every night,” Inger Andersen, executive director of the U.N. Environment Program, told The Times in April. “It doesn’t compute.”

And climate change isn’t the only issue at stake in the race to cut down on meat:

For lab-grown meat to start replacing factory-farmed meat, all of these problems will have to be solved.

Should we launch a moonshot for affordable, lab-grown meat?

While other countries have thrown money behind alternative proteins, America’s lab-grown meat industry has emerged without the support of the U.S. government, which spends $38 billion each year subsidizing the meat and dairy industry.

Perhaps, as Piper and Klein hope, lab-grown meat will eventually become more widely available, and even if its cost never reaches parity with that of factory-farmed meat, a meaningful amount of substitution will become possible. 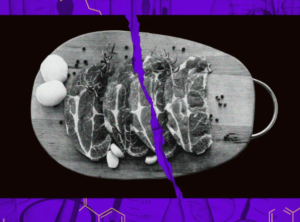 But as Aronoff notes, diets need to change now, particularly in the West. And people generally exercise a degree of control over what they eat in a way they simply do not over how their electricity is generated. America’s love of beef might seem intractable, but another beef-loving country, Brazil, has shown what the beginning of a national shift toward more climate-friendly diets might look like.

Although vegetarians and vegans have the smallest dietary carbon footprints, adopting a more climate-friendly diet doesn’t require becoming one, as the Times food columnist Melissa Clark wrote in her meat-lover’s guide to eating less meat. Following the World Resource Institute’s recommendations, she started focusing more on chicken, pork and seafood (especially mollusks), which produce far fewer greenhouse gas emissions than beef and lamb, both of which she has relegated to special-occasion status.

“I like to loosely think of my approach as mindful meat-eating,” she wrote. “Now, when I do simmer up a pot of beef short ribs (or smear cream cheese on my bagel, or go for sushi), I’m thoughtful and deliberate about it, which makes it taste even more delicious, seasoned with anticipation.”

Armed and Aging: Should Seniors Be Allowed to Keep Guns?

NADvlogs – Writing to your legislators

Medical Marijuana Is Not Regulated as Most Medicines Are