Dr. Kannapell gave them a sense of identity and culture and helped legitimize American Sign Language, which she considered her native language.

Barbara Kannapell, a world-renowned deaf activist who made it her life’s work to empower deaf and hard-of-hearing people with a sense of identity and an appreciation for their own distinct culture, and who advanced the idea that American Sign Language was a legitimate, foundational language, died on Aug. 11 in Washington. She was 83.

The cause was complications of hip surgery, her wife, Mary Eileen Paul, said.

As the daughter of deaf parents who was born deaf herself, Dr. Kannapell grew up in a supportive home environment, with American Sign Language an integral part of her development. A.S.L. is one of more than 300 signed languages in the world, with its own grammar and syntax, and it has given millions of deaf people in the United States a fully accessible language from their earliest days.

Although Dr. Kannapell was comfortable with A.S.L., her hearing paternal grandmother insisted she attend a so-called oral school, in which children are not allowed to sign and are forced to try to speak.

Throughout her early schooling, Dr. Kannapell felt the sting of what is now known as audism — the rejection of people who are deaf. At one school, she wrote in a 2011 open letter, the principal tried to make her say “The United States.” When she was unable to do so, the principal slapped her face. At another, students who could speak were rewarded.

The oral approach, which emphasizes speech, lip-reading and the use of residual hearing, is still practiced today and has vigorous defenders. But Dr. Kannapell wrote that for her, oralism was destructive and made her feel like a failure. It “h 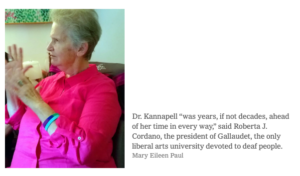 as contributed,” she added, “to self-hate and struggles with identity for generations of deaf people.”

Still, she always had a strong sense of self, and with encouragement from her family, she forged ahead. Despite her early challenges — or perhaps because of them — she was determined to help deaf people shape a positive self-identity and celebrate their achievements.

She considered A.S.L. her native language, and it provided the linguistic foundation for her to become proficient in English — which made her realize, she said, that she was bilingual. She is credited with taking the existing concept of bilingualism and applying it to the deaf experience — a breakthrough that recognized and elevated the value of A.S.L. and empowered its users.

“Once I learned that A.S.L. is my native language,” she told The Washington Post in 1988, “I developed a strong sense of identity as a deaf person and a more positive self-image.”

She was the first deaf person at Georgetown University to earn a Ph.D. in sociolinguistics (the study of a society’s effect on language), and she became a popular consultant, educator and leader in the deaf world. She conducted workshops on power and oppression and lectured across the United States, Central America, South America and Europe on the bilingual education of deaf people.

She was a natural community leader. She was a founder of Deafpride Inc., a nonprofit advocacy organization, in 1972, and served as its president until 1985. The organization, based in Washington, promoted human rights for deaf people and worked with them and their families to provide access t

As someone who had struggled with sobriety (at her death she had been sober for 50 years), she also helped establish an all-deaf group within Alcoholics Anonymous.

“Dr. Barbara Kannapell was years, if not decades, ahead of her time in every way,” Roberta J. Cordano, president of Gallaudet University, the world’s only liberal arts university devoted to deaf people, said in a statement.

“At a time when sign language was significantly doubted, devalued and undermined as important for learning and language development,” Ms. Cordano added, “she was one of the first to research and posit the importance of American Sign Language for all deaf children and adults.”

Ms. Cordano noted that Dr. Kannapell “was also proudly ‘out’ and a strong advocate for the L.G.B.T.Q.I.A.+ deaf community, and a strong ally and leader in our community for removing barriers for Black deaf people” — especially in the realms of education and employment, as well as access to services.

Barbara Marie Kannapell was born on Sept. 14, 1937, in Louisville, Ky. Her father, Robert Harry Kannapell, went into the printing trade, as did many deaf people, and became a linotype operator for The Louisville Courier-Journal. Her mother, Eleanor (Houston) Kannapell, was a homemaker.

Both her parents attended Gallaudet, and Barbara, known as Kanny, followed in their footsteps, earning her bachelor’s degree in deaf education in 1961. She received a master’s degree in educational technology from the Catholic University of America in Washington in 1970. For her dissertation at Georgetown, where she earned her doctoral degree in 1985, she researched the attitudes of 200 Gallaudet students and found that 62 percent of them considered themselves bilingual in A.S.L. and English.

After graduating from Gallaudet, she began a four-decade affiliation with the university, starting as a research assistant in 1962. Her last appointment there was as an adjunct professor, from 1987 to 2003. She also taught at the Community College of Baltimore County, where she started as an adjunct in 1997 and retired as an associate professor in 2014.

She met Ms. Paul, who was a writer and editor and a consultant on women’s leadership (she is now retired), at a gay bar in Washington in 1971, Ms. Paul said in an interview. The bar had telephones at the tables so people could call other tables. Ms. Paul, who hears, was with a friend who called Dr. Kannapell’s table, but all the people there were deaf and couldn’t hear the phone. So Ms. Paul and her friend went over and introduced themselves in person.

“I ran to the library the next day and looked up everything I could find about deaf people,” Ms. Paul said. She then met Dr. Kannapell for lunch, where they communicated in writing.

Their relationship blossomed. When same-sex marriage was still illegal, they held a commitment ceremony; they married in the District of Columbia in 2013. Ms. Paul is Dr. Kannapell’s only immediate survivor.

Among Dr. Kannapell’s many interests, she had a fascination with the experiences of deaf Americans during World War II. Over the decades, she amassed a rich store of data, including interviews with deaf people who had worked in wartime factories and material she received from deaf people and their descendants. She published an early summation of her research, “Forgotten Americans: Deaf War Plant Workers in World War II,” in the magazine of the National Association of the Deaf in 2002.

Ms. Paul and various colleagues are planning to finish her project and publish it in the near future.

I Was Powerless Over Diet Coke