For years, even decades, everyone from patients to presidents has been complaining about the spiraling prices of prescription drugs. Yet little has been done to change that. Perhaps the time has finally arrived.

In May 2017, the AARP Bulletin ran an extended report on why drugs cost as much as they do. While the U.S. health care system is incredibly complex, the answer boiled down to something simple: In a world of strong patent laws and limited regulation of pricing, for-profit pharmaceutical companies have extraordinary power to charge what they want for the medicines they offer.

Little has changed. Drug prices continue to rise far faster than the rate of inflation. The average annual cost of a brand-name drug has more than tripled in the past decade, jumping from $1,868 in 2006 to $6,798 in 2017, according to the AARP Public Policy Institute. Older adults now take an average of 4.5 medications each month, which can add up to a total retail cost of more than $30,000 a year for brand-name drugs.

What’s different is that prices have gotten so far out of control that Democrats and Republicans have found something to agree on. That’s made consumer advocates hopeful that something may soon be done about these skyrocketing costs. In Congress, several bipartisan bills have been introduced to attack the problem. And last May, the Trump administration unveiled a blueprint for tackling high drug prices that contains many commonsense strategies endorsed by AARP.

The solution won’t be simple. “Because our health care system is very fragmented, there is no one silver bullet for this problem,” says Leigh Purvis, director of health services research for the AARP Public Policy Institute.

But AARP believes that a combination of tactics can bring drug prices under control. These include giving the federal government the ability to negotiate when buying drugs, legalizing the safe importation of drugs sold at lower prices in other countries and capping patients’ out-of-pocket costs.

A final approach is to change patent rules that allow manufacturers of brand-name pharmaceuticals to freeze out competition from generic alternatives that could lower prices. “Drug companies are incredibly innovative in finding ways to strengthen their monopolies,” says Purvis. 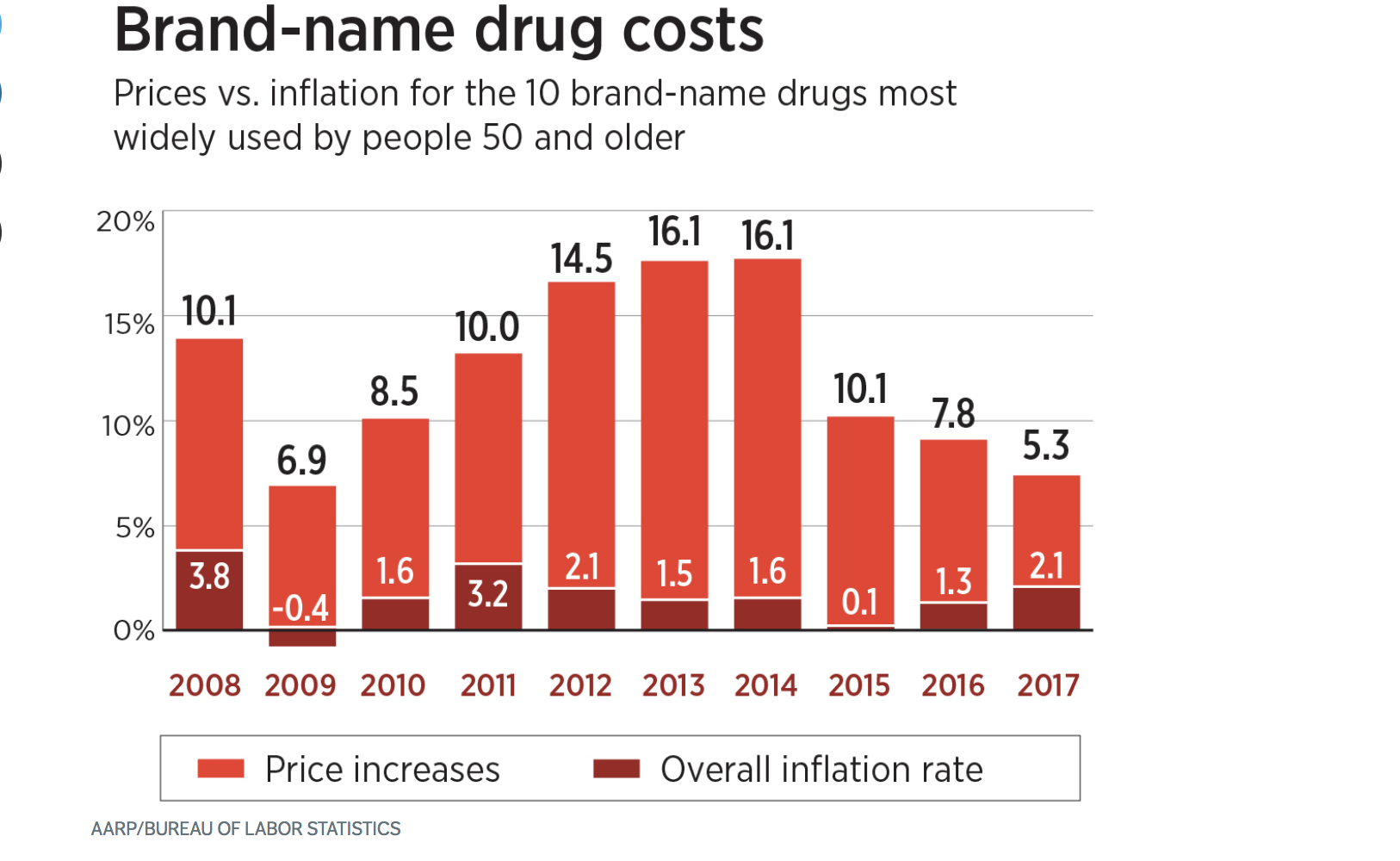 To help in the fight to lower prescription drug costs, AARP has launched Stop Rx Greed, a national campaign to persuade federal and state lawmakers to take action on the issue. The campaign includes lobbying efforts, consumer-information programs and the release of new research about drug prices.

Read on to learn more about the different factors behind high drug prices and what can be done about them.

The problem: Negotiating from weakness

One reason the U.S. has the highest prescriptions drug costs in the world is that we’re the only industrialized nation whose government doesn’t bargain with drugmakers over pricing. The 2003 law that created Medicare Part D outpatient drug coverage shares some of the blame; Medicare, which includes both Part D and Part B (provider-administered) prescription drugs, accounts for 30 percent of drug spending in the U.S. Medicare Part D plans, which now cover about 44 million adults, are required to provide nearly all drugs in six certain classes of medications, such as antidepressants and anticancer drugs, and at least two drugs, if available, in all other treatment categories. These requirements can limit Part D plans’ ability to negotiate with pharmaceutical companies. More important, individual Part D plans don’t have nearly the same clout that Medicare would if it negotiated with drug companies on behalf of all beneficiaries.

In contrast, Australia, Japan and most European nations have some form of a national health program with drug review boards that negotiate with manufacturers. They analyze whether a new drug is more effective than its previous incarnations, or simply a slightly modified version. They’re often able to negotiate significant discounts because they can walk away if companies won’t cooperate. So Humira, which treats autoimmune diseases like psoriasis, Crohn’s disease and rheumatoid arthritis — and is the top-selling pharmaceutical in the world — fetched $3,431 per month in the U.S. in 2015, but cost just $982 in France. The asthma medication Advair carried a monthly $310 price tag here, while it cost just $38 in Germany. The list goes on and on.

The solutions: Giving Medicare the ability to negotiate with drugmakers is the best way to attack high drug prices. What would also help: allowing Part D plans more flexibility in creating their lists of covered drugs, or formularies; arbitrating disputes between manufacturers and insurers; and using a drug’s price in other countries to help set its price here. “Using their price as the basis for value increases [Medicare’s] negotiating ability,” says Ameet Sarpatwari, assistant director of the Program on Regulation, Therapeutics and Law at Brigham and Women’s Hospital in Boston. “After all, drugmakers are still making a profit on their sales abroad.”

The problem: Failure to import

If prices for the drugs we use in the U.S. are so much lower elsewhere, why not import those pharmaceuticals? Canada is often mentioned as an obvious supplier; prescription drugs, as measured by per-person retail spending, cost 33 percent less there than in the U.S., according to a 2017 report by the Commonwealth Fund. And individuals here have been getting drugs from Canada for years. But large-scale commercial importation of medications, through online pharmacies or by cross-border purchases, is still illegal.

The solution: Proposed legislation would let patients buy lower-priced medicines from Canadian pharmacies for personal use. Critics say this would open the door to harmful counterfeits. But there are ways to institute safeguards. The Food and Drug Administration (FDA) has already safely imported drugs to address critical shortages. And more than 40 percent of drugs, both brand-name and generic, are made overseas.

To encourage innovation and allow pharmaceutical companies to recoup their expenses, the federal government grants 20-year patents on new drugs that give companies the exclusive right to market the medication. Because it takes years to get the drug to market, manufacturers end up with a monopoly lasting about 14 years, on average. At that point, theoretically, generic drugmakers can begin selling competing versions.

Substituting generics for brand-name drugs can cut costs dramatically. In 2012, the U.S. Government Accountability Office estimated that generics had saved the U.S. health care system $1 trillion during the previous decade.

But drug companies do all they can to retain their monopolies. For example, they can “evergreen” their patents, usually by repurposing or reformulating medications. These strategies, such as changing dosage schedules, don’t necessarily make the drug any better. They can, however, add as many as 20 years or more to their monopoly periods. These tweaks effectively prevent less expensive generics from entering the market.

“Even a minor tweak may be enough to get you past the Patent and Trademark Office,” says Robin Feldman, author of Drugs, Money & Secret Handshakes and a professor at UC Hastings College of the Law in San Francisco. “Conceivably, you can string these out over and over again, and no one asks whether we’re getting any value for our money.”

In a 2018 analysis, Feldman and her colleagues found that of the roughly 100 best-selling drugs, more than 70 percent extended their protection at least once. For example, Lyrica, used to treat nerve pain, had its monopoly extended from 2009 to 2018 with 16 additions. The cholesterol drug Crestor’s monopoly was lengthened from 2008 to 2022 by piling on 32 additions. “These are not outliers,” says Feldman. “This is business as usual.”

The solution: There is some talk in Congress about attacking the practice of evergreening, Purvis says. “But doing a complete patent reform would be very complicated and a very heavy weapon,” she says. “In the meantime, there are smaller efforts that are nibbling around the edges to get at the abuses.”

Falls Can Kill You. Here’s How to Minimize the Risk.