The dirtiest things in your house might surprise you by   Jodi Helmer, AARP, March 22, 2021

Meg Pritchard admits that she ignored a lot of the deep cleaning tasks at her home in Elkins Park, Pennsylvania — until the pandemic hit.

Endless hours at home meant that Pritchard, 56, had time to tackle big cleaning projects. She cleared out cupboards, closets and the refrigerator, scrubbing the shelves, vacuuming the dark corners and disinfecting surfaces — and the amount of dirt and dust surprised her.

“It’s amazing how much dog hair collects in the shoe closet, [and] there was a layer of detergent in the laundry sink that I’d never noticed before,” she says. “I wrote out a long list of home cleaning projects that I want to get to.”

The pandemic has inspired a lot of deep cleaning. The latest data shows that almost half of Americans are more aware of the areas of their homes that need to be cleaned and that 59 percent have adopted new or more frequent cleaning practices.

When you start spring cleaning, don’t forget to clean these seven essential — and often-ignored — areas of your home.

Even if your plates and utensils look spotless, your dishwasher may be dirty. Researchers have found that dishwashers often contained bacteria that were linked to health problems, ranging from food poisoning to skin infections.

“Food gets left in there and it can start to smell,” says Haley F. Oliver, a professor of food science at Purdue University. “You end up rewashing your dishes with old dirt.”

To clean out trapped food particles, unscrew the screen from the dishwasher floor and remove the filter; use dish detergent and a brush to scrub the filter, then let it air-dry. Oliver suggests cleaning the dishwasher filter every week.

After the filter is clean, clean the inside of the dishwasher. Fill a dishwasher-safe mug with white vinegar and run it on the “normal” cycle with hot water to loosen soap scum and grease from the interior. 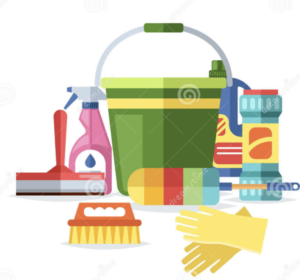 Scrubbing the burned foods crusted on the bottom of the oven and the grease coating the oven door might be the least appetizing item on a housecleaning to-do list. Oliver notes that temperatures get so hot inside the oven that bacteria have no hope of survival, but germs are not the sole reason to get out the scouring pads.

“Nothing ruins a delicately flavored food like something burning in the bottom of the oven,” Oliver says. “You end up with cupcakes that taste like char.”

A dirty oven can also cause a grease fire.

The self-cleaning feature on your oven is a good default, but nothing matches the effectiveness of some old-fashioned elbow grease. Oven cleaners often contain harsh chemicals; lemon juice, baking soda and vinegar can get the job done without the lingering smell of chemicals tainting the next meal you cook.

Turning on the ceiling fan might offer a cool breeze on a hot, humid afternoon, but it also scatters the dust and pollen collected on the fan blades. Cue the sniffling and sneezing.

Admit it: The bags you toss in your trunk after every shopping trip have never seen the inside of the washing machine. These oft-used, never cleaned bags are breeding grounds for bacteria. In one test, the number of bacteria multiplied 10-fold when a reusable bag with leaked meat juice was left in the trunk of a car for two hours.

“In a lot of these reusable bags, we found more E. coli and fecal bacteria than you do in your underwear,” says Charles P. Gerba, a microbiologist and professor at the University of Arizona. “If you use the same bags to carry raw meat products and raw vegetables, you could make a salmonella salad really easily.”

Gerba suggests sticking with cloth bags that can be washed and tossing them in the machine (washing in hot water) after every use. It’s also a good idea to designate separate bags for meat and produce.

You know that a clogged lint screen is a fire hazard, so you clear it out after each load. But when was the last time you cleaned the dryer vent? Lint can also get trapped in the vent that runs from your dryer to the outside of the house — and failure to clean it is linked to $35 million in fire losses every year.

Use a skinny brush with a long handle to remove lint from the vents (or have a pro come in to do the job). The good news: It only needs to be done every three months.

Even though the average person changes their bedding every 24 days, most likely ignore their mattresses. In fact, a 2018 study published in Royal Society Open Science compared the number of bacteria found in chimpanzee beds to the number found in human beds. Our primate relatives maintained cleaner sleeping environments, with just 3.5 percent of bacteria coming from their skin, saliva and feces compared to 35 percent in human beds.

To clean your mattress, strip off the bedding and vacuum the entire mattress, paying special attention to the crevices where dirt and dust collect. Use a stain remover to spot-treat stains. Sprinkle baking soda over the mattress to deodorize, and vacuum again to remove the baking soda. Plan to repeat the entire process every six months.

Your kitchen sponge might be dirtier than the surfaces you’re trying to clean. In one study, researchers found 309 different species of bacteria, from salmonella to listeria, on kitchen sponges; concentrations were as high as 45 billion bacteria per square centimeter.

“Bacteria grow to huge numbers because [sponges] are moist and always picking up food for bacteria to munch on,” Gerba explains.

Nuking a sponge in the microwave might kill bacteria, but it may be better to replace your germy kitchen sponge on a regular basis. 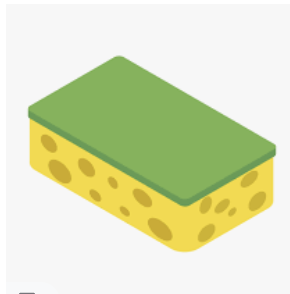 Research suggests that the strongest bacteria may survive the microwave, leaving your sponge even more stinky and germy than ever.

Bacteria counts are highest after three days, according to Gerba. After that, replace your old kitchen sponge with a new one.

No one wants to spend more time cleaning, but the extra effort will leave you with a healthier home.

Jodi Helmer is a contributing writer who covers gardening, health and the environment. She has also written for Scientific American, National Geographic Traveler and NPR.

A Probiotic for Obesity?